13-year old Avery Maizel could definitely be called a true survivor. At age 6, during a Christmas visit in 2008 to her grandparents in Palestine, Texas, she was sitting alone in the cockpit of her grandfather’s idling airplane.

She was waiting for her granddad to get in, when the plane somehow slipped into gear and headed down the runway without him. The plane accelerated and even took off, only to crash just off the end of the runway, but miraculously Avery escaped with only minor injuries.

The event made the NBC national news, and just six months later Avery was back in the air with her granddad – that being her first time to survive what could have been a very different outcome. Her next survival episode began when she was diagnosed with a large tumor at the base of her brain.

Laura Hinojosa, a physical therapist at South Plains Rehab (one of the local AmTryke Evaluation Centers for the Lubbock Monterey AMBUCS) has worked with Avery and says that Avery has recovered from the cancer. However, “Avery has dealt with on-going balance issues due to the chemo she underwent for the cancer.”

Laura says the new Amtryke, which Avery recently received from the Monterey AMBUCS at one of our regular Monday luncheons, helps with Avery’s strength and endurance. Avery’s mom, Shyla, says that Avery was an extremely active girl before the tumor and chemo, and that she has been very restricted, but now is excited about riding her new AmTryke with her dad Brad. 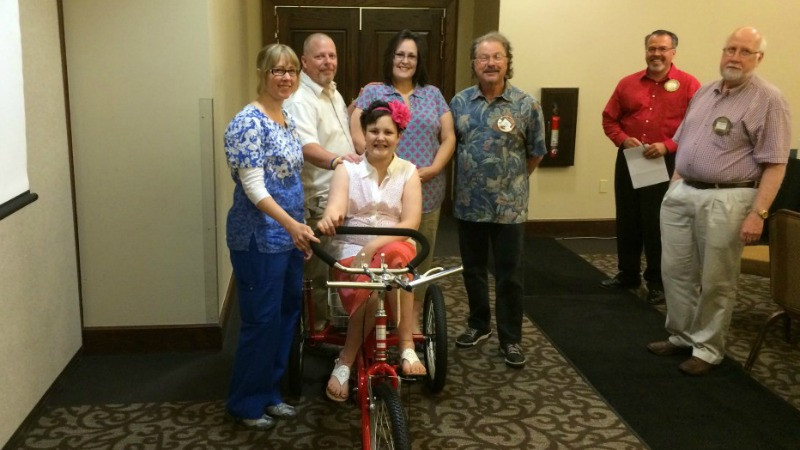 If you’d like to be a part of sharing in the happy ending to stories like Avery’s on a personal community level, consider JOINING our club. We meet each Monday for lunch at the McKenzie/Merket Alumni Center on the Tech Campus.