Jason Davis, and his wife Michelle, joined us for our regular Monday Luncheon recently at the Mckenzie/Merket Alumni Center on the Tech Campus to receive his new AmTryke, presented by Gary McDonald our club’s Ambility Committee Chairman. 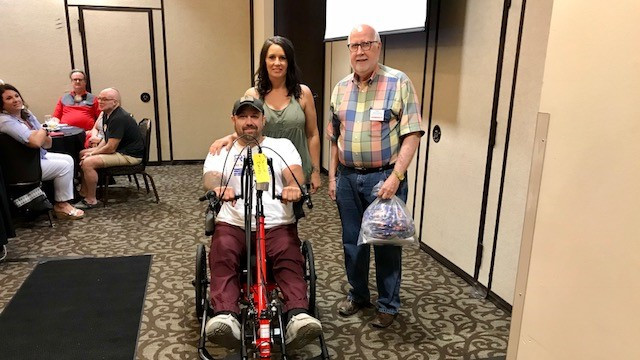 Four years ago Jason was a manager at Caprock Cafe, and was regularly working out and running 75 miles per week. Then he was involved in a motor vehicle accident in which he suffered a spinal cord injury that left him unable to use his legs.

He has been a therapy patient at Trustpoint – one of our club’s local AmTryke Evaluation Centers, and he has been working with Heather Baugh, his Physical Therapist who recommended Jason for his new AmTryke.

Jason and Michelle have 7 kids, 4 of whom are adopted and they are considering adopting another one; and Jason is excited about his new AmTryke’s allowing him to get back outside with the kids and start working on that 75 mile per week target he used to hit!

It is so gratifying to be able to help folks like Jason, who have such a zest for life, to be able to get back out and recover a portion of what they have lost – and if you’d like to share in that mission, JOIN US for one of our upcoming Monday Luncheons and find out more about what we do.