Each month, we will be highlighting one of our AmTryke recipients. To kick off our new website, we wanted to highlight one of our newest Vet Bike recipients to show that the dollars that are donated to Lubbock Monterey AMBUCS can go to immediately improve the lives of local veterans, as well as children and adults of all ages.

Steve Hamilton is a 47-year old totally-disabled veteran of Korea whose life has been changed dramatically for the better with the gift of a JT-2000 Recumbent Cycle from our club.  The JT-2000 is one of almost twenty different AmTrykes available through the Amtryke program, and Steve says that “It’s great to once again get out and feel the air”, especially with his having been very restricted for the past 26 years, since his initial injury in Korea in 1989.

“With the two grandkids getting older and starting to ride bikes themselves, it will be fun for them to ride with Pa-Pa.” – Steve Hamilton

Steve is from Acuff, Texas, home of the famous Acuff Steak House, where Steve says the local football team almost put the place out of business during two-a-days in high school. Upon graduation from High School, Steve enlisted in the Army and was sent to Fort Polk, Louisiana for 2 years before heading off to Korea and Camp Gary Owen – the army camp highlighted in Mel Gibson’s movie We Were Soldiers.

Steve was overseas for 16 months, separated from his new wife Gina, and their son Ryan, who was only 5-months old when Steve shipped out. Now, 28 years later, Ryan is working to become a diesel mechanic, is married to Shawndi, and they have 2 kids, Madison (7) and Jaxson (almost 2). Steve and Gina also have a daughter, Emily, who is working on a degree which will allow her to work for the VA in a counselling position with the families of disabled vets like her dad. 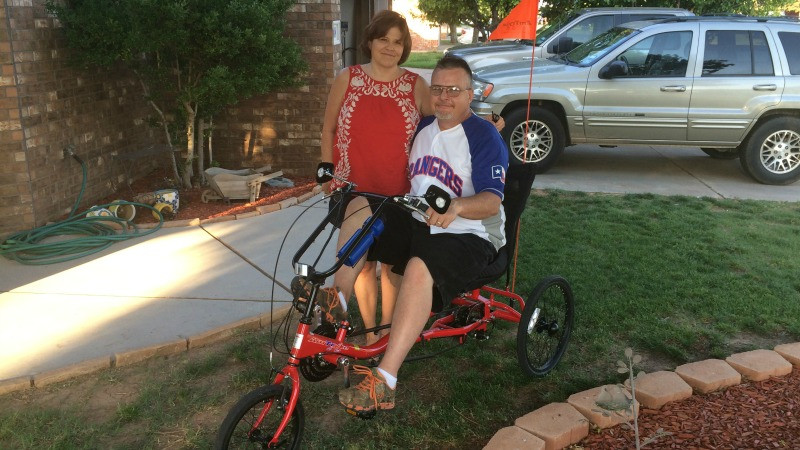 It’s interesting that Ryan is working to become a diesel mechanic, since that’s what his dad was doing when he became disabled. Steve says he was in what was called the 63 Bravo Diesel Mechanics, and regularly worked on 10-ton trucks with tires taller than him. It was while working on one of those giant vehicles that Steve’s initial injury occurred.

He was holding a rope attached to a starter the size of his current dining table, lowering it into the engine compartment where his co-worker awaited the starter to attach it to the engine. Somehow the rope slipped form Steve’s hands and he immediately reached up to grab it – just in time to save his co-worker from probably being killed.

However, with the sudden jerk from his grabbing the rope, Steve felt his back snap, and he has never been the same since. He says that each year he has suffered progressive nerve damage, and most mornings has to lie across the living room coffee table to drink his coffee and allow his body to begin to respond to getting up.

After leaving the Army in 1991, Steve worked for Pepsi for a while, but couldn’t count on how he would feel from day to day, and in 2004 he gave that up to became a Sergeant with the Texas Department of Criminal Justice. Unfortunately, after a few years on the job, he says he found himself dragging his right leg, rendering him unable to perform his duties, and he retired fully from that in 2010.

He says that the biggest thing that his new AmTryke has done for him is to relieve the depression that comes from a once-healthy young man’s being confined and restricted in so many ways. His doctors say he can’t lift more than 5 pounds (meaning he can’t enjoy holding his 2 grandkids) so he can’t get a regular gym workout, and he can’t go for long walks.

His wife, Gina, says that if he were to try to ride a standard bike, he would run the risk of his leg going numb and falling over and injuring himself further, and says that’s one of the biggest benefits to her with Steve’s new AmTryke. She says, “Steve has the independence to ride when he wants to, and I don’t have to worry about his being out on his own!”

Steve says that the bike gives him the opportunity to get a good workout and that now if he’s out on his new JT-2000 and his leg goes numb, he simply has to stop pedaling and sit there till the numbness passes, and he adds, “with the two grandkids getting older and starting to ride bikes themselves, it will be fun for them to ride with Pa-Pa”.

Steve and Gina are both tremendously grateful for the new-found independence that Steve’s new AmTryke has given him. We, as a club are also thankful that we can provide these special bikes to those who need them, and if you’d like to be a part of providing more of these AmTrykes to deserving folks in our community, then check out both the Donate and Join Us pages of this site, and see what you can do to share in the blessing of knowing you’ve helped folks like Steve.