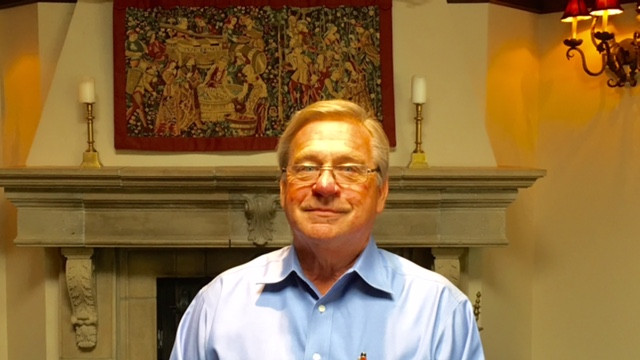 He says he originally joined, because, “I was asked by a friend!” So, let’s all think about friends we might ask to join during our Fall and Spring Memebrship Drives.

David “assists people with their insurance needs” – for several years owning his own agency. After selling his agency, he is now associated with Arthur J. Gallagher & Co. – an international brokerage firm with over 1,000 offices in 140 countries.

When asked for an interesting fact about himself, David says he is related to Mark Twain.  I thought he would say something about liking to barbecue and making his own sauce, but since he didn’t, I’ll share that he does an outstanding job of grilling our steaks each year for our Annual Steakout tied to the Fair Restaurant Fund Raising Project.

David is married to Jo Beth, who is a former AMBUC, and has two children who he says grew up working at the Fair Restaurant – and now has two grandsons.

He enjoys going to the lake and/or ranch on weekends, and his goal is “to keep having fun at whatever I choose to do!”

If you’re reading this on Facebook, and don’t have a friend like David did, who will ask you to JOIN US in our mission at Monterey AMBUCS, come on by anyway, any Monday for lunch at the McKenzie-Merket Alumni Center on the Tech campus, and I bet you’ll find plenty of friendly folks to welcome you.