Jennifer Jones says,  “I’m still a “freshman in the club”, having just joined in 2016. She works for SERVPRO of Southwest Lubbock as a sales and marketing representative, and says, “I LOVE my job.  It is never the same from one day to the next or even one minute to the next. You never know when someone will call with an emergency, so that we can go in and make it Like It Never Even Happened.” 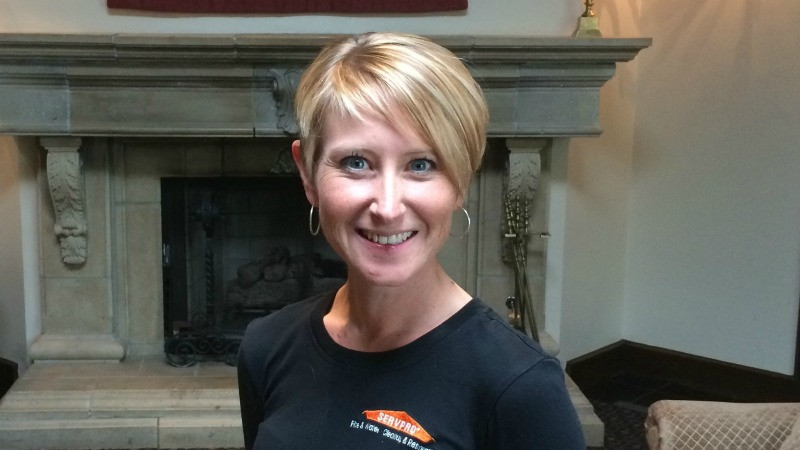 Asked why she joined Monterey AMBUCS, Jennifer said she’s always had an interest in the AMBUCS organization, but something became apparent to her after SERVPRO started doing the cooking for the Challenger Little League End Of Season Party and awards presentation – “When I saw how well they all worked together and how much fun they had I knew I had to have more.”

Jennifer added that she also joined for her children. Her daughter Shae is 12, and has Down syndrome, and Jennifer says that after seeing how much this AMBUCS group does for and loves people with intellectual or physical disabilities, she knew it was the place for her. “I also wanted my children to see how important it is to be involved in the community and to help, wherever it is needed.”

Jennifer describes herself as the epitome of a West Texas girl. Her mother’s father was a high school football and track coach, and her dad’s father was a cotton and peanut farmer. “You can’t get much more ‘West Texas’ than that.”

She shared that If she’s not at work or chasing her kids around, she’s usually crocheting, having first started crocheting, “because it looked like something that I would enjoy. But it seems to have taken on a life of its own.”   Jennifer says she is self-taught (“well, if watching YouTube videos counts as self-teaching then…”), and in the process, its become like therapy to her. “It’s what I do to unwind after a long day, or just to pass the time.”

Jennifer has 2 “beautiful” children. As noted earlier, her daughter, Shae, is 12, and will start 6th grade at Frenship Middle School this school year, while her son, Jaxon, is 10, and is starting 5th grade this school year at Oakridge Elementary. Jennifer graduated from Frenship High School, and adds, “so having them at Frenship schools feels like home to me.”

When asked about her goals, Jennifer said, “To be a Godly woman, serving God in every capacity that is needed.”   She then added that she wants to be a good mother, and to show her children the difference between right and wrong and to always stand up for what they believe in.  And lastly, she wants to be successful in her career.  “Trying to find the balance between being a full-time mom and a full-time employee can be difficult, but having understanding employers that believe in family first is a huge help.”

And having members like Jennifer, who has jumped in and taken on more than her fair share of the club’s activities, is a huge help to us as we seek to raise even more money for more AmTrykes and Therapy Scholarships, and if you’d like to find out about the special aspects of our club that Jennifer initially saw, then Join Us some Monday for lunch at the Mckenzie/Merkett Alumni Center on the Tech Campus.